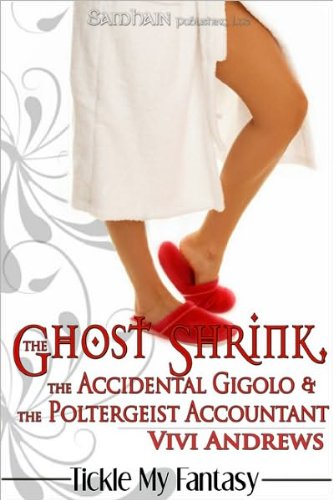 
It's not smart to piss off a poltergeist... It's bad enough to be sexually frustrated.  But as a medium, it means until Lucy Cartwright gets some, she's doomed.  Oh no, not death, worse.  To nightly visitations by recently deceased, wanna-be Casanovas without bodies to back it up.  Then a living, breathing fantasy arrives on her doorstep, and Lucy thinks her dry spell is at an end.
Much as he would like to be Lucy's personal gigolo, PI Jake Cox has a job to do.  He's been sent to prevent her from getting laid until a particularly horny phantom-and key witness in his mob investigation-pays her a visit.  The real challenge?  Keeping his own hands off Lucy long enough to get the job done.
Or the lonely, geeky host of a murdered mob accountant could rip a hole in the fabric of the universe...
Warning: This book contains cheesy pick-up lines, amateur stripteases, and voyeuristic intentions - all by dead men.  And the living behave just as badly... (From Goodreads)

First Sentence:
"Oh please, kill me now."
My Review:
This "cheesy" paranormal romance had me from the first line.  It is a quick novella, but I just couldn't put it down.  The title is what captured me originally, but the fun didn't stop there.  Poor Lucy is a medium that has a lot of pent up sexual frustration, and until that gets resolved she will be visited by extremely horny ghosts.  Lucy's boss, Karma (isn't that adorable!) has called to let Lucy know that in order for these ghosts to go away, Lucy will need to be sexually satisfied.  Lo-and-behold, in comes PI Jake Cox!  He is quite the hunk and just what Lucy needs to get her fix.
I loved the writing style in this novella, Andrews has a way with words that just made the entire story flow quickly and smoothly.  This is book one in the Karmic Consultant series, and I will definitely be checking out the rest of the books in the series.
Quotes

"Karma was a vindictive bitch, but this was taking things too far."

"If I have to have one more conversation about repressed sexuality with a naked ghost, I'm going to turn in my resignation and you can find someone else to torture."

Ratings
Liked: The fast-paced, free-flowing writing style.
Disliked: I wish it would have lasted longer, but like I said, I will definitely be checking out the other Karmic Consultant novellas.
Favorite Character: Karma
Least Favorite Character: Larry
Cover: 4/5
Characters: 5/5
Writing Style: 5/5
Plot: 5/5
Ending: 5/5
Overall: 4.75/5
Happy Reading!

This sounds like quite a fun read! Sometimes a novella is just the thing when there's not a lot of time to get some reading in, but you don't want to be hanging in the middle of a story wanting to finish it!