Review: Lies That Chelsea Handler Told Me - Chelsea's Family, Friends and Other Victims 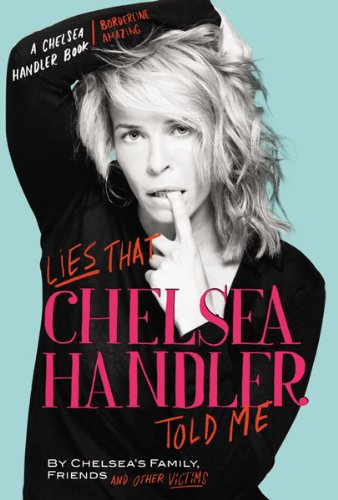 "My tendency to make up stories and lie compulsively for the sake of my own amusement takes up a good portion of my day and provides me with a peace of mind not easily attainable in this economic climate." - Chelsea Handler, from Chapter 10 of Chelsea Chelsea Bang Bang
It's no lie:  Chelsea Handler loves to smoke out "dumbassness", the condition people suffer from that allows them to fall prey to her brand of complete and utter nonsense.  Friends, family, co-workers -- they've all been tricked by Chelsea into believing stories of total foolishness and into behaving like total fools.  Luckily, they've lived to tell the tales and, for the first time, write about them.


First Sentences
"My name is Chelsea Handler and I'm not proud of myself.  I have made a career out of being a misanthrope with the maturity level of an eight-year-old who had to repeat the third grade several times."


My Thoughts
Oh lord Chelsea and her victims have completely made my day.  What a fantastic read!  Chelsea, you are my hero --- honestly, if I could be just like you and get away with it...I WOULD!
Chelsea doesn't let anyone get away unscathed.  Everyone at one point or another has been scorned by Chelsea and it is amazing.  These stories had me "pulling a Chelsea" -- I just made that up...it means I peed in my pants...read the book, she's almost famous for it.
If you've read any of her other books, this is a must read.  There were many times that some of her victims were recounting things that she wrote about in previous books, and wow, their stories were much different....so in a way...I'VE been lied to by Chelsea Handler...we have ALL been lied to by Chelsea Handler.  Well played Chelsea, well played.

Favorite Quotes
"Even when it's at the expense of others, it's important to laugh.  Laugh loudly, laugh often, and most important, laugh at yourself."


"I don't know why or when she learned to type like that, but my guess is that in high school someone said, 'We're giving free abortions to the fastest typist in the room.'"


"You think Tina Turner didn't jump every time Ike reached for the salt?"