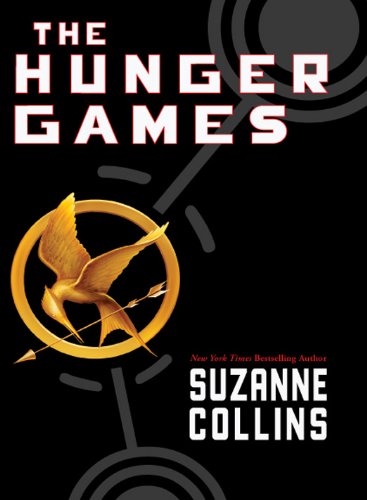 In the ruins of a place once known as North America lies the nation of Panem, a shining Capitol surrounded by twelve outlying districts.  The Capitol is harsh and cruel and keeps the districts in line by forcing them all to send one boy and one girl between the ages of twelve and eighteen to participate in the annual Hunger Games, a fight to the death on live TV.  Sixteen-year-old Katniss Everdeen, who lives alone with her mother and younger sister, regards it as a death sentence when she is forced to represent her district in the Games.  But Katniss has been close to dead before-and survival, for her, is second nature.  Without really meaning to, she becomes a contender.  But if she is to win, she will have to start making choices that weigh survival against humanity and life against love.

First Sentences
"When I wake up, the other side of the bed is cold.  My fingers stretch out, seeking Prim's warmth but finding only the rough canvas cover of the mattress.  She must have had bad dreams and climbed in with our mother."

My Thoughts
Wow, I have no idea why I waited so long to get my hands on this book.  Once I did though, I couldn't put it down.  I didn't really know what to expect.  I got a run down of it from a friend that read it and it sounded interesting, but I didn't really think much of it. Boy did she forget to mention just how awesome this book really is!!  I cannot wait until I get my hands on the second book, Catching Fire.
Anyway, I don't want to give too much away, so I will just say that the story is suspenseful, but also pulls on your heart strings.  I cried, several times...not that it is really that hard to make me cry, but dang...
I instantly fell in love with Katniss -- I mean it seems almost impossible not to like her.  I think her only flaw is the fact that she doesn't always see things that are right in front of her eyes...
I knew that Katniss had to survive the Hunger Games one way or another, as I knew that there were two more books in the series.  I just was amazed at the way it happened.
If you don't listen to any of my other suggestions, please listen to this one.  Seriously.


Favorite Quotes
"District Twelve.  Where you can starve to death in safety."

"The Treaty of Treason gave us the new laws to guarantee peace and, as our yearly reminder that the Dark Days must never be repeated, it gave us the Hunger Games.
The rules of the Hunger Games are simple.  In punishment for the uprising, each of the twelve districts mus provide one girl and one boy, called tributes, to participate.  The twenty-four tributes will be imprisoned in a vast outdoor arena that could hold anything from a burning desert to a frozen wasteland.  Over a period of several weeks, the competitors must fight to the death.  The last tribute standing wins."

"Look how we take your children and sacrifice them and there's nothing you can do.  If you lift a finger, we will destroy every last one of you."

"Here your dreams are sweet and tomorrow brings them true
Here is the place where I love you."


"I know I'll never marry, never risk bringing a child into the world.  Because if there's one thing being a victor doesn't guarantee, it's your children's safety.  My kids' names would go right into the reaping balls with everyone else's.  And I swear I'll never let that happen."