A Cornucopia of Dystopia - Interview with Katie Kacvinsky Katie Kacvinsky worked in the entertainment industry and as a high school English teacher before deciding to write full time.  She currently lives in Corvallis, Oregon. 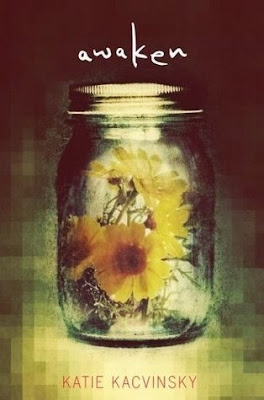 Review | Amazon | Goodreads
When and why did you begin writing?

I started writing consistently when I took time off of college and moved to Los Angeles.  Every day I lived there was writing material and I needed a place to collect my memories.  After LA, I moved around for many years and writing in my journal was like having a friend with me.  It was always an outlet.

When did you first consider yourself a writer?

The first time I saw my name in print was when I wrote for my college newspaper.  I think seeing my name in bold letters under my articles and knowing that it was reaching an audience is when I started to call myself a writer.

What inspired you to write Awaken?

I love dystopian stories and I like to write the types of books/scripts/stories that I would like to read.  I wrote Awaken because it's a book that I would pull off the shelf.  I'm also a little freaked out by how digitally obsessed our culture is becoming, which inspired the themes in my book.

How did you come up with the title?

My main character is controlled by technology.  The book is about her waking up and learning how to use her senses which have been dulled by spending so much time in a digital world.

Is there a message in Awaken that you want your readers to grasp?

If my book makes people consider their own habits/values I think that's great.  I'm not trying to preach technology is bad and we should all throw away our computers.  I'm just saying let's not become too dependent on technology.  Let's turn our phones off once in a while and be in the moment.

What books have influenced your life the most?

The book that changed my life was The World According to Garp, by John Irving.  After I read it, I went out and bought all of his books.  Now I collect them all in hardcover.  John Irving surprises me on every page.  When I have one of his books with me, I feel like I'm travelling with a friend.  His books encouraged me to be a writer.

What is the biggest challenge you faced while writing Awaken?

The toughest part was the rewrites.  Awaken is futuristic;  it also has a ton of back story and many complex characters that have their own back story.  Getting all of these storylines and characters to stay consistent was challenging.

Are Maddie and Justin based on family members or friends?

No, these characters are just part of my imagination  I've tried writing characters similar to my friends and family, but then they become too autobiographical and it limits where the story can go.  It was fun creating Maddie and Justin because they were so fictional;  it let me escape into their story and write it from their perspective.

The cover of Awaken is beautiful, did you have any input in the design?

No, the design completely surprised me and I love it!  That is all Carol Chu's amazing talent!

What is your current read?

What do you like to do in your spare time?

I love going to the coast and hiking, I love getting a beer with friends.  Lately I'm obsessed with watching TV shows like "Spaced," and "How I Met Your Mother."  I also love to travel.  I have a loner personality and I get antsy if I'm tied to one place for very long.

Thank you so much for letting me interview you Katie!

Maddie lives in a world where everything is done on the computer.  Whether it's to go to school or on a date, people don't venture out of their home.  There's really no need.  For the most part, Maddie's okay with the solitary, digital life -- until she meets Justin.  Justin like being with people.  He enjoys the physical closeness of face-to-face interactions.  People aren't meant to be alone, he tells her.

Suddenly, Maddie feels something awakening inside her -- a feeling that maybe there is a different, better way to live.  But with society and her parents telling her otherwise, Maddie is going to have to learn to stand up for herself if she wants to change the path her life is taking.

In this not-so-brave new world, two young people struggle to carve out their own space.